Here is why Google is more and more failing to impress me. First, as a shopping search engine, Froogle is next to useless. Second, as a calendar service, Google Calendar lacks a critical and obvious feature. Third, as an email reader, Gmail is no longer impressive (and it’s still in beta after how many years?). Fourth, as a news/blog reader, Google Reader is pretty ho-hum compared with at least one competitor. With these service shortcomings I have to ask, why isn’t Google — with its billions of dollars of cash, its 8,000 top-notch employees cherry-picked from competitors, and with its cachet as one of the coolest places on the planet to work — why isn’t Google better at what it does?

My first, albeit minor disappointment with Google came years ago with the launch of Froogle. When I first saw Froogle, I thought, “Cool, with Google’s search technology and the way they vacuum up and index most of the web, this will surely outperform all other shopping sites.” I was wrong then, and every time I’ve used Froogle since, I continue to be wrong. And disappointed.

Why? Froogle, by default, sorts search returns by relevance. The result is the product I’m looking for tends to be at the top of the list. That’s good. The problem is the cheapest relevant product isn’t at the top of the list. That’s what I’m using Froogle for in the first place. Here’s part of a screen shot showing a search for M.S. OneNote 2003, with prices in an apparent random order.

With Froogle, I have to manually find the lowest price among pages of “relevant” results. Why can’t Froogle automatically sort the “relevant” product results by price? If I want to sort by price, Froogle offers that as an option: select “Sort by price: low to high” from the drop-down box. 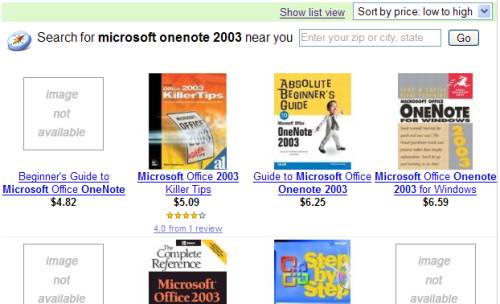 Ah, and as you can see in the above screen shot, that’s when all the irrelevant items show up at the top of the list, usually pages and pages and pages of related products, such as books and accessories. The problem frequently arises with software. The sort-by-relevance search won’t easily find me the lowest price, and the sort-by-price search finds me the books written about the software, the various “OEM disk-only” solutions that seem a bit dodgy, and various other product near-misses. I was amazed when Search Engine Watch awarded Froogle Best US Shopping Search Engine in 2005.

Disappointed by Froogle, I’ve turned to BizRate, NexTag, and PriceGrabber as providing more useful price comparisons. I don’t tend to like Yahoo! Shopping or msn Shopping because of their limited number of online stores they apparently track. DealTime and Shopping.com seem more hit-and-miss when searching for products. For instance, when searching for the best price for an Olympus voice recorder, model VN-2100PC, DealTime and Shopping.com were convinced I was shopping for RAM for my computer, or plumbing supplies. The other sites (including Froogle, to its credit) had no problem homing right in on the Olympus product.

But one disappointment wouldn’t take the shiny gleam off of Google. No. They’ve done so many things right with other cool applications. But just in the past few months, I’ve found Froogle isn’t the only place Google falls down. Google Calendar, which I began using a few months ago, Gmail, which I’ve been using off and on for more than a year, and Google Reader, which I started using this month, all lack in usability or expected features, especially when compared to competing web services.

Google Calendar probably is the biggest letdown of these three productivity applications. Google developers seem to have spent enormous effort building Calendar and the way-cool Calendar Data API to allow developers to access Google calendars remotely from other applications. But sorely missing is the simple, expected feature of being able to set how you are reminded of each approaching calendar event. Google Calendar does provide three notification options: a pop-up dialog box, an email message, or a pager/SMS message. However, the notification method you choose for your event reminder type is global for all events.

For instance, say I want to be notified of important events (flight departs in 2 hrs) by receiving a text message on my phone. Google can do. But once I configure Google Calendar to send one reminder to my phone, all reminders now go to the phone (dry cleaning ready for pick up). By allowing only one notification type for all events, I’m either frequently interrupted by my phone with low-priority reminders, or I have to accept high-priority reminders getting emailed or appearing only when I’m online.

After being pushed into the arms of Yahoo for its online calendar, that’s when I discovered Yahoo’s updated Mail service. I remember trying Yahoo mail many years ago and abandoning it as the usual clunky web mail. But the Ajax-enabled beta email service is nice. It uses separate tabs to open messages. You can have several messages open at once in different tabs, rather than opening each message into the current window, as Google does. From the Yahoo Inbox, you can hit Enter to open the current email in a new tab, read the email, hit Esc to close the tab and return to the Inbox, then hit Del to delete it. Or, if you want to save the message, you can actually move it to a folder and drag messages into the folder for organization. Gmail instead insists on enforcing the Web 2.0 world view of tagging to organize email. I actually like being able to tag emails with several labels, but tagging is different than all other email programs I’ve used. For me, 99% of my mail only needs one tag, so Yahoo’s more-familiar folder system works fine, and its user interface is superior. Just like Gmail, Yahoo mail supports other keyboard shortcuts, like hitting r to reply to the selected message. (However, Yahoo went with keyboard shortcuts Ctrl-. and Ctrl-, for up-down navigation rather than the more usual k and j that have been used in the Unix world for decades and that Google adopted.)

Yahoo Mail also integrates with Yahoo Calendar. When viewing email, the bottom of the window displays upcoming events from your Yahoo Calendar along a horizontal scroll pane. That’s a nice feature I don’t see in Gmail.

With Yahoo Mail besting Google’s Gmail in functionality and usability, I’ll turn my attention to one of Google’s newer web services, its recently updated news reader, Google Reader. Google Reader was the first web-based news reader I tried. Previously, I had used Thunderbird‘s built-in news reader, but I wanted a web-based reader so I could read the same blogs and news sites from any of the half-dozen computers I use during a given week.

I have no real complaints about Google Reader’s functionality. The problem is, it’s just not impressive. 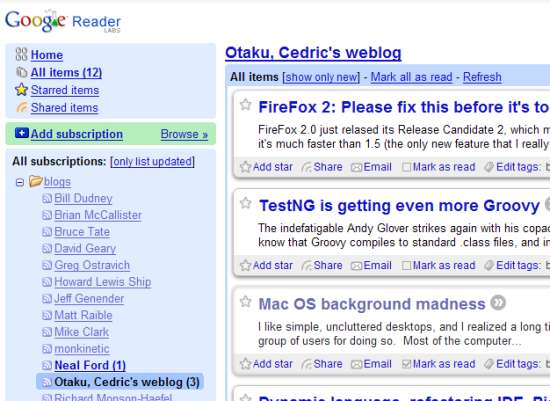 Google Reader does a good job of letting you see what’s new in your subscribed feeds, and lets you click feeds in order to scroll through its entries to read. I like the fact that it has a full (“Expanded”) view and a “List” view to read just the titles of the entries. My chief dissatisfaction with Google Reader is it just isn’t cool and full of extra features that make using it a nice experience. As compared to? Well, after I started using Reader, I noticed almost as many visitors to my blog were coming from Netvibes as were coming from Google Reader. So I checked it out and started playing with it. What I discovered was a news reader with cool, even fun, features that make reading news and blogs faster and more efficient for me.

Netvibes organizes feeds/blogs into portlets, which can be re-arranged on screen, resized and minimized. (See the screen shots, below.) Here are some of the cool things Netvibes can do:

Until I saw the Netvibes referrers in my logs, I had never heard of it. Then, two days after first starting to use it, I picked up September’s Business 2.0 magazine and saw Netvibes being mentioned as a “disrupter” of leading portal websites like Yahoo.

So, these are four Google’s web applications that leave me wanting, and leave competitor services more impressive. My initial wow-I-didn’t-know-you-could-do-that-in-a-web-page feeling I got years ago with Google Maps has been replaced by me wondering what’s Google up to that it would allow its applications to become second-rate. I have two theories.

My first theory is the Google’s complacency is a symptom of corporate maturity. Google doesn’t have to be cool any more. It needs to answer to shareholders. Perhaps Google is directing its focus and energy to today’s moneymakers: AdWords and AdSense.

My second theory is that Google is leaving services like Froogle, Calendar, Gmail and Reader to languish for now because it has bigger fish to fry, new services that Google will roll-out that will allow it to suck even more of the profit from its chief competitors — Yahoo and Microsoft — and place it into the hands of Google and its shareholders.

I don’t follow the business intricacies at Google to pretend to know the details. But Google’s recent You Tube purchase makes it clear Google wants to be a we-have-it-all portal service to make Yahoo less relevant, with Google reigning supreme in the search and web advertising business. And we all know Google has been working on its web-based version of office productivity applications to replace (or at least augment) Microsoft’s Word and Excel (with Docs & Spreadsheets), Outlook (Gmail, Calendar), and the remaining Microsoft Office applications. Google’s Apps for Your Domain is the first step in that direction until it adds the remaining Office applications to that suite.

So, instead of focusing on gee-whiz applications, I’m guessing most of Google’s development and marketing resources are working on the web versions of Word, Excel, and probably an improved version of Gmail to replace Outlook for some users.

In the meantime, Google has failed at one of its 10 corporate philosophies: “Always deliver more than expected.” Google, I expect more from you with Calendar, Gmail and Reader. Your competitors are doing more. But perhaps Google, when its web-based Office-killer applications take hold among businesses in the next year or two, will reprise a line from Pirates of Silicon Valley. I can see the day when Bill Gates or Yahoo’s Jerry Yang confront Google CEO Eric Schmidt and tell him, “We’re better than you are! We have better stuff.” Schmidt will turn away and say over his shoulder, “You don’t get it. That doesn’t matter.”