The United States Air Force finally has a memorial in the nation’s capital. The memorial was dedicated Saturday in a ceremony attended by President Bush and other dignitaries. The memorial honors those who have served and those serving in the Air Force. Its triple stainless steel spires soar to varying heights up to 270 feet in a “bomb burst” flaring-out pattern.

The memorial sits on a small hill between Arlington Cemetery and the Pentagon, and is visible from I-395 on the left as you approach Washington from Virginia. An approximate location is marked by this Google map. (If you view the map, the memorial is actually where Columbia Pike bends north toward Southgate Road.)

The weekend ceremonies were by invitation only, although the public was invited to view Saturday’s ceremony remotely from big-screen TVs set up in the Pentagon South parking lot. The Washington Post has a video of the event.

Rather than watch from the parking lot, my wife and I viewed the airplane flyovers accompanying the event from the Mount Vernon Trail next to National Airport. Yes, they had to temporarily shutdown commercial air traffic for the event, as vintage and modern war planes flew overhead, capped off by a flyby from the Air Force’s Thunderbirds. (Photos below.)

Ceremonies continued this morning with a memorial service. The service included a wreath-laying ceremony and a flyover (right) from four Air Force F-16s in a missing-man formation.

The memorial opens to the public on either Monday or Tuesday. (The Washington Post says Tuesday. The A.F. Memorial Foundation says Monday.)

Here are some of the other photos we took of the events.

Bicyclists on the Mount Vernon Trail look toward the memorial in the distance. 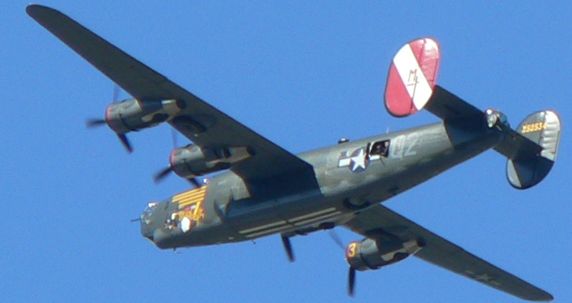 A Consolidated B-24 Liberator makes a flyby. Apparently, this is the only restored Liberator still flying.

A B-2 Spirit bomber made an approach from the east. My wife caught this picture just as it flew into the sun.

The B-2 banked right as it flew over the memorial. This is the first time I’ve seen a stealth bomber in flight. You can really see how the plane’s thin profile helps foil radar echoes. 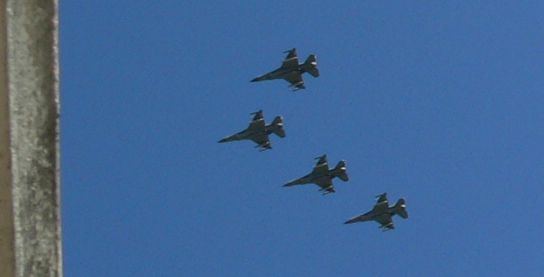 This photo from this morning shows the F-16 ‘missing man’ formation as it flew over our apartment.