Here’s something you don’t see everyday: A black cloud of smoke wafting toward the U.S. Capitol.

It was unusual enough for my wife to snap a couple of pictures of the fire from our apartment across the Potomac River in Arlington. We checked the Washington Post, Washington Times, and the websites for the local TV stations later Sunday and today. Not a peep. 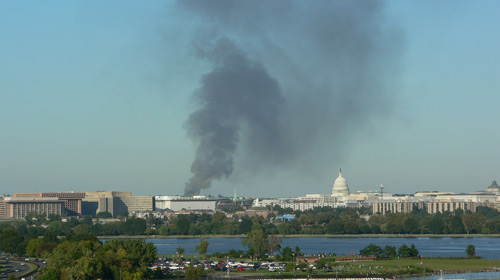 Granted, the fire was a couple of miles north of the Capitol building, and no one apparently was hurt from the fire (because that would have made the news, right?) but the fire must have affected some residents of northwest D.C., even for the annoyance of the smoke. That’s why we were a little surprised not to read anything about it in the news today. Hmmm. And to think, Sunday began this year’s National Fire Prevention Week.