For Independence Day 2019, the U.S. military conducted ceremonial flights over the National Mall, highlighting each of the five military branches: Army, Navy, Air Force, Marines, and Coast Guard. Here are some of my photographs of the flyovers. I try to identify the aircraft and military branch, but corrections would be welcome if you spot an error.

The airshow was the accompanying performance to a speech given by President Donald Trump from the Lincoln Memorial plaza, dubbed “Salute to America.” Most of the president’s speech, however, focused on a salute to the U.S. military’s flying wings, as he introduced each military branch’s aircraft flyover with history of the military branch and some of its glorious achievements.

“We will now begin our celebration of the United States Armed Forces,” President Trump said, “honoring each branch’s unique culture, rich history, service song, and distinct legacy.” You can view the speech and read it here.

The flyovers began with a low pass of a Boeing VC-25, which is a modified 747 that serves as “Air Force One” when it carries the president of the United States. Since the president was speaking at the Lincoln Memorial at the time of the flyover, I guess it wouldn’t technically be called Air Force One. But it sounds better than VC-25, so let’s go with it.

The roar of its four engines as Air Force One passed low overhead was, shall we say, a little surprising since it swooped in from the west behind me as I was facing east toward the National Mall. The photo above is taken with a zoom lens at 165mm focal length, but the jet appeared overhead about as close as it looks in the photo.

The next photo shows Air Force One as it starts a right-hand turn once it reached the Mall area.

In case you were unaware of what the weather was like in D.C. on the Fourth of July, a rainstorm had just passed through, which threatened for a while to cancel the airshow. Even though the rain cleared, skies were gray and cloudy for the rest of the afternoon and evening. It wasn’t the best weather for an airshow, but the flyovers were still spectacular.

In announcing the Coast Guard’s aircraft, the president said the Jayhawk is stationed at Coast Guard Air Station Clearwater in Florida, the Ocean Sentry from Miami, and the Dolphin from Atlantic City, whose unit patch features a Dolphin in front of a great poker hand and a pair of dice.

The Air Force flyover was next. They flew a B-2 stealth bomber over D.C. with two F-22 fighter escorts.

These are close-up images I captured of the B-2 and F-22’s as they zoomed west toward me.

There are faint red wing lights on the B-2, but the almost totally black silhouette against the gray sky looked impressively ominous.

The Navy was the next military branch the president honored during his speech.

The Marine Corps followed next with three helicopters. The highlight was a VH-92 flanked by two V-22 Ospreys.

The VH-92 model is intended to replace the VH-3D Sea King and VH-60N White Hawk models the Marine Corps uses to transport the U.S. president, when the helicopters are called Marine One. The V-22 uses tilt-rotor propellers in order to take off vertically like a helicopter but then rotate the propellers forward to fly more efficiently like a regular propeller airplane.

The Marine helicopters are stationed nearby at Quantico.

Rather than a quick flyover as conducted by the other services, the Army flew four AH-64 Apache helicopters into a hovering attack formation over the Washington Monument. I have to say, having four Apache attack helicopters staring at you and pointing their missile tubes in your general direction for a minute makes a statement.

Capping the military spectacle was not one, but two flyovers from the Navy’s Blue Angels aerobatic team.

Six Blue Angels F/A-18’s flew into Washington, D.C. from the south and made a sweeping left loop northeast of the U.S. Capitol before trailing white smoke and heading west directly over the National Mall. The above image is from a video I took of the Blue Angels’ first pass (east-to-west) over D.C. 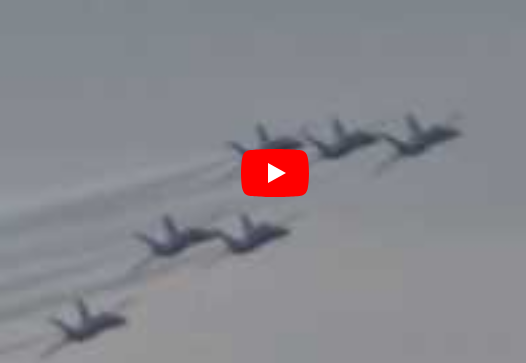 Since all other aircraft made only one pass over the city for the Independence Day air show, many observers, including me, were caught off guard when all of a sudden the jets returned a few minutes later from the west, which was behind me obscured by buildings so I didn’t see them coming. I heard them coming, though, just seconds before they zoomed overhead. I barely had time to raise my camera to capture the photo below.

On this pass, the Blue Angels didn’t just make a simple flyover as they did on their first run. On their second pass, they zoomed over the Lincoln Memorial and then broke into a starburst pattern.

The above photo was taken just before they broke tight formation and formed a starburst pattern, below.

My angle didn’t do justice to the starburst formation, mostly because of the smoke trail. If you’d like to see an excellent photo of the starburst pattern they formed over the Lincoln, check out the Blue Angels’ Facebook posting.

With that final flyover, the airshow ended. The high humidity and atmospheric low inversion layer, though, left behind a smokey haze that settled over the Potomac River for more than 10 minutes. It was an eery look.